Posted by Barb Caffrey in Book Review on December 31, 2015

As promised, here’s my first new review in months…though there will be more in the New Year from me, Jason Cordova, and a few guest reviewers.

Rysa Walker’s dynamic trilogy The Chronos Files wraps up heroine Kate Pierce-Keller’s story in TIME’S DIVIDE, but there are other stories in her universe nearly as compelling. And because the related novella, “Time’s Mirror,” had a number of interesting tidbits that helped to better understand what was going on in TIME’S DIVIDE, I’m going to start with that. 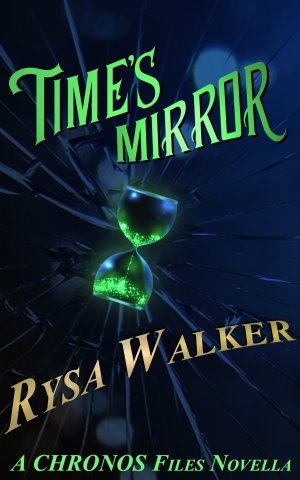 “Time’s Mirror” features Prudence Pierce, Kate’s maternal aunt. Prudence is a teen in the prime of life growing up in the 1980s when she accidentally activates a Chronos key, vaulting her hundreds of years into the future — and under a pile of rubble.

Prudence, you see, has a gene that allows her to time-travel, similar to her yet-unborn niece, Kate Pierce-Keller. (Kate’s mother, Deborah, apparently only carried this gene and couldn’t have activated the Chronos key, but that’s another story entirely.) And Prudence had no idea that her mother, Katherine, was from the far future and marooned in our time — much less that her real father, Saul Rand, was a murderous psychopath bent on reshaping the world in his own, demented image.

Anyway, Prudence is rescued from the pile of rubble and given rehabilitation. But along with her favorite foods not existing any more, there being almost no animals left (including cats and dogs) and other, various changes, she finds out that her physical therapist was literally born to be what she is; there is now next to no choice in what you do or how you do it. Worse yet, everyone is now genetically predisposed to enjoy to the fullest whatever it is they’ve been programmed to do. And as a teenage girl from our time, she obviously can’t abide this at all — nor should she.

At this point, she makes contact with a guy named Tate. Tate is a stranded time-traveler, too, but is stranded in his own era so you’d think he’d have fewer problems than Prudence is having. However, Saul’s made so many changes to the timeline that his parents no longer exist and he’s in danger of winking out of existence as well. He and Prudence fall in love, which isn’t as icky as it sounds because Tate is still quite young also — in his early twenties. (Most of the actual sex stays off-screen.)

Prudence decides she’s going to try to return to her own time, and Tate decides to help her. But rather than landing back in the 1980s, she ends up somewhere else — somewhere her real father, Saul Rand, can take advantage of her youth and inexperience. Saul tries to befriend Prudence, but Prudence is wary, mostly because she knows Tate was one of Saul’s best friends yet Saul doesn’t seem to care whatsoever what happened to Tate and indeed never asks about him.

Why is Saul pretending to be nice? Well, he needs her for his new religion, called the Cyrists. He is Brother Saul, and she is Sister Prudence, and between the two they manage to give “prophecies” (actual information based on historical events); however, sometimes a personal touch is needed, and Saul can no longer time-travel as he’s in the same boat Prudence’s mother Katharine is in. So Prudence must do that instead.

Overall, “Time’s Mirror” explains just why Prudence Pierce (also known as Prudence K. Rand) is not only important, but is actually a tragic figure. The way she’s used by Saul is despicable; the way her own, future self tries to help her only adds to Prudence’s struggles.

Now, why did I need to explain all this? It’s because Prudence has a much bigger role in TIME’S DIVIDE than in previous novels. (But I’ll get to that.) 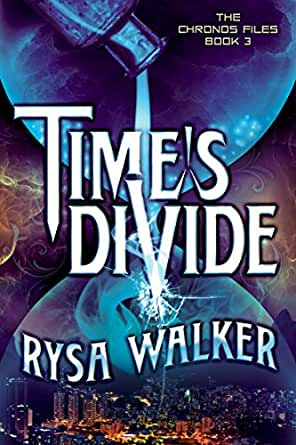 Back to Kate, Prudence’s niece, who remains in big trouble. She and the two men she loves — Kiernan and Trey — are both in the cross-hairs of Saul and his minions. Kiernan is more of a friend, while Trey is the young man Kate yearns to be with…yet both have been harmed already by Saul and his Cyrists, with worse to come unless Kate can avert Armageddon.

And this time, Brother Saul has prophesied that Armageddon is coming, and has only given the faithful Cyrists the needed vaccinations against a terrible disease.

Prudence does not want Saul to do this, but by this time, she’s been so used and abused by Saul (much less all the time-traveling she’s done) that she doesn’t have much of a sense of self left. Prudence is assumed by Kate to be psychotic, but that isn’t correct, as Kate finds out during the course of TIME’S DIVIDE…Prudence is mentally damaged, yes, but she still loves her sister Deborah and to this day has never forgotten Tate, the one man she’s ever loved.

Kate and Prudence must make common cause, but their alliance is uneasy to begin with and is made worse by various iterations of the younger Prudence popping into and out of time to cause trouble. And to add even more fuel to the fire, there’s another version of Kate running around — a heavily pregnant one — that’s been captured by Saul and is being forced to do Saul’s bidding in the name of his new religion, the Cyrists.

So, there’s multiple versions of Prudence, and there are two versions of Kate. And there’s a nasty biological virus that Saul is about to unleash, but has been canny enough to plant among a terrorist cell featuring yet another crazy time-traveler stranded from the same far-future era as Saul and Kate’s grandmother Katherine.

How can Kate, Prudence, Trey, Kiernan, and the few good Cyrists about avert tragedy? And will everyone live happily ever after (even Prudence)?

Trust me on this — if you have read any of the previous Chronos Files novels, you will want to know how this book ends. You may not agree with all of it (goodness knows, I didn’t), but you will be caught up in a splendid, action-packed thriller that you don’t want to end.

Bottom line? Read the novella “Time’s Mirror” first, to completely understand why Prudence Pierce (AKA Prudence K. Rand) is so important. But then do read TIME’S DIVIDE, and ask yourself — if you were in Prudence’s shoes, would you be able to do as much?