Cedar Sanderson’s “Vulcan’s Kittens” Is a Nice YA Read 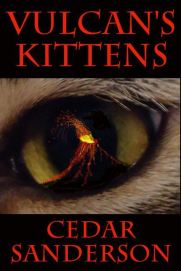 This week, it’s time to take on Cedar Sanderson’s short debut novel, VULCAN’S KITTENS.  A take on the whole “normal kid finds out she’s part-immortal” theme most recently popularized by Rick Riordan, VULCAN’S KITTENS stars Linnaea (Linn) Vulkane, granddaughter of Haephestus (Heff) — otherwise known as the Greek god, Vulcan.  A war between the gods is brewing, and nothing is exactly as it seems.  But at the start of this book, Linn has absolutely no idea that she is related to any immortals, much less that she might have some otherworldly powers herself.  (Of course, if Linn had known all this at her young age of fourteen, I’d have been incredibly surprised.  But I digress.)

Anyway, the kittens come into play because Heff’s good friend Bast, an Egyptian goddess, has had kittens recently, and is staying in Heff’s house out in rural Montana.  Linn’s visiting her elderly grandfather, and since she’s there, she helps take care of the kittens.  Like kittens anywhere, they’re small, cute and defenseless.  And even though Linn finds out the kittens are the scions of two immortals, not just one, that certainly doesn’t mean they came into this world knowing everything they need to know.

Linn has a huge heart, so even before she realizes she might have some additional powers beyond her own essential goodness, she decides she’s going to protect those kittens.  It doesn’t matter to her that other gods are trying to harm the kittens (who can’t be killed, exactly, but can definitely be seriously harmed); that may make her task more difficult down the line, but she will deal with that as it comes.  And as the kits like Linn quite a bit, Bast decides to leave them in Linn’s competent hands as she must try to head off some of the opposing vengeful gods at the pass.

Despite the soon-to-be-war, for a little while — a time that seems almost dreamlike — Linn’s existence is what you’d expect of any city kid thrust into the countryside.  In addition to playing with the kittens and taking care of their needs, she learns all sorts of things about milking goats, skinning small animals like squirrels and rabbits (as Grampa Heff is a big believer in hunting), and a number of camp chores.  But because Heff knows that the war between the various gods is imminent, Linn also learns how to protect herself in both hand-to-hand combat and swordsmanship.

Wisely, Linn learns these things in a realistic, piece by piece fashion, the way any kid learns.  She’s not an immediate expert, something I appreciated mightily.  And because Heff sees Linn as a bright and compassionate young woman rather than “just a kid,” Linn actually is better prepared to face the worst than she might’ve been if she’d been immediately dismissed in the way many teens tend to be, in and out of fantasy books.

Anyway, Linn ends up on the run with the kittens, as the war between the gods erupts in earnest.  She’s not sure what she’s going to do, much less where she’s going to go, but she does know one thing: she will protect those kittens, or die trying.  (Because as a kid who’s only half-immortal, Linn can indeed be damaged, and perhaps even killed.)

The rest of the plotline is for you to read, but if you enjoy young adult books that read well and quickly — and who doesn’t? — you will enjoy the ins and outs of VULCAN’S KITTENS.

There are a few minuses, however, that have to be discussed.  As this is a first edition of a first novel, there are a number of typographical errors, a few grammatical errors, and some outright oddities (like a margin shift on the first page) to deal with.  These are issues like “naiad” being spelled in one place as “niaid” or Linnaea’s full name being spelled wrong once or twice, and are all minor.  But enough of them exist to cause this book to look less professional than it should.

In other words, the writing is professional.  Linn’s coming of age story is a particularly nice young adult read that I enjoyed quite a bit.  But the editing is not up to the same standard.

Were the editing up to snuff, this would be an A-minus read.  But since it’s not, VULCAN’S KITTENS stands as a B-minus.

Young adults of all ages should definitely enjoy VULCAN’S KITTENS, as it’s a fun, fast read from start to finish.