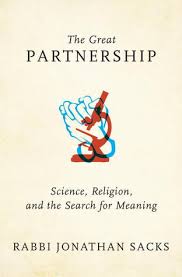 Rabbi Jonathan Sacks’ THE GREAT PARTNERSHIP: Science, Religion, and the Search for Meaning is one of the more compelling nonfiction books I’ve read in quite some time.  Sacks’ main argument is this: Science and religion are two sides of a coin, and human beings need both in order to both explain the world around them (science) and explain why we need to explain it in the first place (religion).

Because Sacks’ first training was in philosophy, he is a very different sort of rabbi.  He believes the scientific method has a great deal of merit, and that without it, human beings would likely not have progressed technologically, health-wise, and otherwise.  But he also believes that religious thought has a great deal to offer as well, mostly because (as Sacks says), “humans are a meaning-seeking animal.”  And without meaning, what is the point of our short human lives?

Sacks also believes that you do not have to believe six impossible things before breakfast (as Lewis Carroll wrote) in order to have faith in some sort of religion.  Nor must you abjure science; in fact, as Sacks puts it on page 219:

The idea that in some sense the findings of science in the past two hundred years — whether in cosmology, quantum physics, the theory of relativity, Darwinian evolution, genetics and the mapping of the genome, or PET scans and the working of the brain — challenge our religious understanding of the universe is absurd.

Basically, Sacks’ argument is as follows: Science explains the world.  Religion explains why we care.  And without religious faith, Sacks argues, the moral fiber of Judeo-Christian culture — much less Arabic culture, which Sacks also goes into briefly — would’ve been greatly changed.

Or in yet another way to describe it: Religion is about relationships.  Our relationship to God (which in Sacks’ terminology is definitely male, as Sacks follows the God of Abraham).  Our relationship to others, where we try to be the types of people God would want us to be (our ideal selves, as it were), providing we’re any of the “People of the Book” — members of the Jewish faith, which Rabbi Sacks knows so well; the Christian faith; and/or the Islamic faith.

Sacks points out that anyone — whether you’re a secular humanist, an atheist, or any one of a number of other differing faiths — can embody the best aspects of humanity.  But his main argument is that without Abraham — a man who was not a king of any principality, nor known as a wise man, nor perhaps not even a particularly good father — the way humankind evolved would not be the same.  And because of how pervasive the three main religions that all were engendered by Abraham in some fashion or another have been throughout recorded history, secular humanists, atheists, Wiccans, etc., have all been exposed to many aspects of Judeo-Christian/Islamic thought in addition to whatever other studies they may have done along the way.

Mind you, Sacks is not the first person to have made this argument.  The noted historian and philosopher Mircea Eliade made it in any number of books, including A HISTORY OF RELIGIOUS IDEAS, Vol. II: From Gautama Buddha to the Triumph of Christianity, and it’s inconceivable that Sacks hasn’t run across Eliade’s writing in Sacks’ long career.  But most of Eliade’s work is dense (yes, I’ve read it), and it takes much thought to fully understand, while Sacks’ work, while still erudite and scholarly, is much more accessible, thus much more approachable as well.

One argument that Sacks actually is the first to make is that Christianity contains some dichotomies (a God who is personal in some aspects, and impersonal in others) precisely because the Bible, as a whole, was written down in Greek.  But the thought process behind it, as Sacks persuasively explains, was very Jewish in tone and origin — thus, readers of the Bible are seeing thoughts and expressions that probably were originally written in Hebrew (as well as Aramaic) and would have a far different connotation in that language, but are explained in Greek, which doesn’t have nearly the same emotional resonance.

Because Sacks has studied both philosophy and religious thought in depth — and because he’s a Jewish theologian, so he’s studied the Torah (the first five books of the Hebrew Bible, which is known to the rest of the civilized world as the Old Testament) in its original language as well as in translation — Sacks has both the depth and breadth of thought to explain this oddity.

I mean, think about it.  Anyone who’s studied comparative religion in any depth knows that ancient Jewish thought was absolutely nothing like ancient Greek thought.  But most people raised as Christians, reading the Bible as translated into our modern-day languages, are unaware just how much of that Greek thought crept into the New Testament, because we’re all reading a translation of a translation.

And because of that, many things that are otherwise inexplicable in the New Testament are far more comprehensible after Sacks shines his light upon them.

Sacks’ book has a few minor drawbacks.  He can get strident when it comes to what he believes is the downfall of society, including his opposition to same-sex marriage, euthanasia, and abortion (which he persists in calling “abortion on demand,” an extremely inflammatory term).  He goes on a bit too long while explaining how, without religion, we humans might not be interested in trying to explain what we see and measure (science, in a nutshell), much less tell a story about it afterward.   And every once in a great while, I felt like Sacks was yelling at the reader rather than trying to gently persuade instead.

Bottom line?  THE GREAT PARTNERSHIP is a thought-provoking read that I thoroughly enjoyed.  So if you like both religion/spirituality and science, but have always wondered just how these two could ever coexist, go grab yourself a copy of this book, pronto.

Then be prepared to have your assumptions challenged.  Repeatedly.

This entry was posted on August 22, 2013, 5:07 am and is filed under Book Review. You can follow any responses to this entry through RSS 2.0. You can leave a response, or trackback from your own site.