Lackey and Mallory’s “Crown of Vengeance” — One Compelling Epic Fantasy 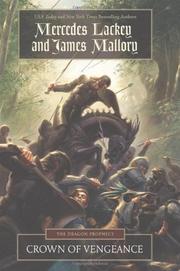 Mercedes Lackey and James Mallory’s newest novel is CROWN OF VENGEANCE, book one of a new trilogy about the great Elven Queen Vieliessar Farcarinon.  Previous readers of Lackey and Mallory’s work will recognize Vieliessar from a short snippet in a previous novel, WHEN DARKNESS FALLS (book three of the “Obsidian Mountain” trilogy).  She was described as the best queen the Elves ever had.  She was also the best mage, the wisest ruler, skilled with both sword and magery alike.  And of course the legends about her mostly speak of her benevolence, as she’s the one who drove the nasty, vicious Endarkened out of Jer-a-Kaliel.

(A quick note about the Endarkened: They do not see themselves as evil.  They are servants of a God known as He Who Is.  They also are blood mages who enjoy causing pain and death to maximize their own power, and especially enjoy killing Elves.  But the Elves, at first, do not know about the Endarkened.  Thus ends the history lesson.)

If you’ve read the other six books Lackey and Mallory have written about this world, you already know that Vieliessar’s story isn’t going to go exactly the way history has remembered it.  Because of this, you can safely assume that Vieliessar is both more and less than what history gives her credit for.

So yes, she will turn out to be a triumphant Queen.  And a brilliant military tactician.  And a great mage, oh yes.

But she’s also a flawed person, someone the reader can empathize with.  Because her power sets her apart.  And it’s hard for her to find anyone who can relate to her, due to her own amazingly strong abilities.

Having a sympathetic heroine is absolutely essential in a book where most of the character names are at least four syllables in length.  And when a character has hundreds of years to become what she needs to be, for that matter — because Vieliessar isn’t human.  She’s an Elf.  And at this time in Jer-a-Kaliel’s history, because we’re so far back in the past, humans aren’t even in the picture because they haven’t yet evolved enough to matter.

We pick up Vieliessar’s story literally at birth.  Her noble mother, Nataranweiya, has fled to the Sanctuary of the Star — clerics and mages, the equivalent of a nunnery or monastery — as her husband has been slain, along with nearly all of her retainers.  (Those few she had left were the reason she was able to reach the Sanctuary at all.)  Nataranweiya gets there, gives birth, and promptly dies . . . but because Vieliessar’s birth was seen centuries ago by an ancient and possibly mad King, and because Vieliessar is, after all, in a holy Sanctuary, the enemies that brought down the House of Farcarinon are not able to kill Vieliessar outright.

Instead, she’s fostered out.

We pick up the story again when Vieliessar is twelve.  Renamed “Varuthir,” all she wants to do is to become an Elven knight.  She knows nothing of being the last of Farcarinon; she knows nothing of her birth, her mother, her status as “Child of the Prophecy” or anything else.  So when she’s shipped off to the Sanctuary of the Star to become a perpetual servant, she is outraged.

That one of the nobles cruelly tells Vieliessar exactly who she’s supposed to be (minus the Child of the Prophecy part, as the Sanctuary didn’t let on about any of that) before she leaves just adds salt to the wound.

So, Vieliessar goes to the Sanctuary, and becomes a servant.  She’s there for perhaps as many as ten years, learning that servants are people like any other — that the “Landbonds,” who’ve been held as serfs, tied to the land, are perhaps more noble than anyone who’s inherited a title — and that magic has its limits.

Then, one day, she calls fire.

A wise servant tells Vieliessar to hide her new abilities, as if she’s chosen to become a Lightsister (mage and cleric, both), she’ll lose her protected status.  (Only if she stays in the Sanctuary or on its grounds is she safe.  And perhaps not on the grounds, depending on how the other noble houses feel about it.)  But of course Vieliessar isn’t able to do that.

If she had been, it would’ve been a much shorter, and far less interesting, book.  But I digress.

The remainder of the novel deals with how Vieliessar first becomes a mage, then an Elven knight, and finally reclaims her birthright as a noble.  In so doing, she realizes she must unite the Hundred Houses behind her banner, as she firmly believes that evil is approaching, just as that mad King said centuries ago.

But her quest is not an easy one.  Before she’s done, she may alienate every friend she has, all to keep at least some semblance of Elven society alive.  And because she knows this — and knows how rare it is to find a true meeting of the minds, besides — her fate and fame become that much more compelling.

There’s some really good characterization here.  The problems of the Landbonds and servants are well-drawn.  The nobles — Higher and Lesser — are also well-drawn, though their petty politicking grows tiring even to those Highborns willing to partake in such.  And despite her immense powers in a wide variety of spheres, Vieliessar is a likable, winning heroine that most readers will be willing to cheer for — even as they wish the Endarkened would just go away and leave her alone already.

Because this is book one of a new trilogy, you may safely assume that the scenes with the Endarkened are more like an appetizer than an actual main course.  This is fine, as far as it goes, especially if you’ve read the previous six books.

But even if you haven’t, there’s more than enough here to show that the Endarkened are nasty pieces of work that you definitely wouldn’t want to invite to dinner.  (Or anywhere else, either.  Because they’d probably have you as the main course, and smile while they killed you, as slowly and painfully as they possibly could.)

Bottom line?  This is a fine epic fantasy, a quest story with heart, and a compelling read from beginning to end.

If you love epic fantasy, loved any of Lackey and Mallory’s previous six books in this world, or have enjoyed any of the two authors’ solo efforts, you will enjoy this book.

And if you love all of the above, plus appreciate seeing that legends aren’t always what they’re cracked up to be (they might be more, might be less, but are assuredly different), you will adore CROWN OF VENGEANCE.

This entry was posted on March 17, 2013, 3:45 am and is filed under Book Review. You can follow any responses to this entry through RSS 2.0. You can leave a response, or trackback from your own site.